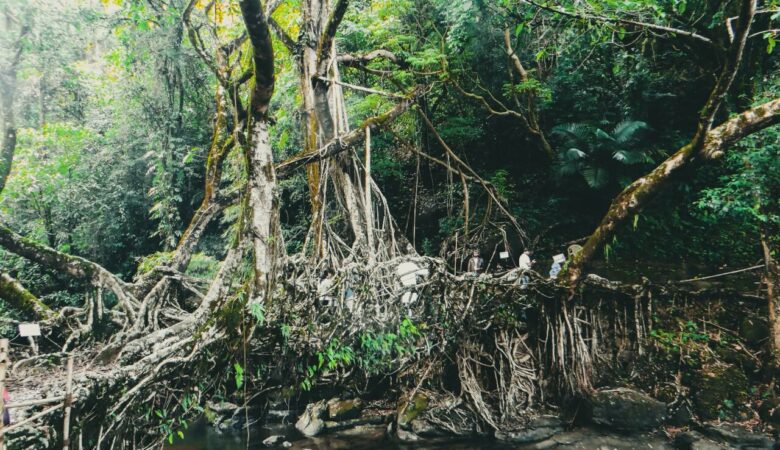 Early morning, proceed for safari. Enjoy an Elephant Safari inside the Kaziranga National Park to spot the Great Indian One Horned Rhinoceros at close sight. Return to Hotel for breakfast. Rest till lunch, evening visit Organic Tea Estate where you can shop for organic/fragrance teas. Enjoy the local Folk Dance – Bihu Show. Dinner & stay at Hotel.

After breakfast check out & transfer to Cherrapunjee – a town in the East Khasi Hills of Meghalaya (approx. 6hrs drive) Lunch will be served enroute. Reach hotel & check in. Dinner & overnight stay in hotel, Cherrapunjee.

Early morning with packed breakfast transfer to Dawki village to visit Umngot river is also known as Wah Umngot & is the crystal-clear river. The river is very transparent & can see the pebbles in the river. This river is 6 meters deep. The water in the river is very cold but people here enjoy swimming. Later proceed to visit cleanest village in Asia – Mawlynnong & enjoy lunch there. Proceed to visit the Living Root Bridge. Back to Cherrapunjee hotel for dinner & overnight stay.

After breakfast proceed to visit Kamakhya Temple. Later back to hotel for check out & lunch. Transfer to Guwahati Airport to board flight.

At Kaziranga – Hotel IORA the Retreat or similar.

At Shillong – Hotel Poinisuk or similar.

At Guwahati – Hotel Vishwaratna or similar.

Timing schedule, Places of sightseeing, quality of accommodation… all excellent.
The management team did a good job considering the age group of participating tour members.

ASSAM, History and Geography:
The word ‘Assam’ as interpreted by some scholars is derived from the Sanskrit word Asoma meaning peerless or unparalleled. But the widely accepted opinion of the academic circles today is that the term has come from the original name of the Ahoms, who ruled the land for about six hundred years prior to its annexation by the British. The races like Austric, Mongolian, Dravidian and Aryan that came to this land long-long ago have contributed to its composite culture. Thus, Assam has a rich legacy of culture and civilization.
Assam was known as Pragjyotisha or the place of eastern astronomy during the epic period and later named as Kamrupa. The earliest epigraphic reference to the kingdom of Kamrupa is found in the Allahabad pillar inscription of king Samudragupta. Kamrupa is mentioned as a Pratyanta or frontier state outside the Gupta empire but with friendly and subordinate relation to it Hiuen Sang, the Chinese scholar pilgrim who visited Kamrupa in about 743 A.D. on an invitation of its monarch, Kumar Bhaskar Varman, left a record of the kingdom he called Kamolupa. Kamrupa also figured in the writings of the Arabian historian Alberuni in the eleventh century. Thus, from the epic period down to the twelfth century A.D., the eastern frontier kingdom was known as Pragjyotisha and Kamrupa and kings called themselves ‘Lords of Pragjyotisha’.
The advent of the Ahoms across the eastern hills in 1228 A.D, was the turning point in Assam history. They ruled Assam nearly for six centuries. The Burmese entered through the eastern borders and overran the territory at a time when court intrigues and dissensions were sapping the vitality of the Ahom royalty. It became a British protectorate in 1826 when the Burmese ceded Assam to the British under the provision of the Treaty of Yandabo.
Assam is the sentinel of north-east India and gateway to the North-Eastern States. The State is close to India’s international borders with Bangladesh and Bhutan. Assam is surrounded by Bhutan and Arunachal Pradesh on the north, Manipur, Nagaland and Arunachal Pradesh on the east and Meghalaya, Tripura and Mizoram on the south.
Area – 78,438 sq. km, Population – 3,11,69,272, Capital – Dispur, Language – Assamese.

Kaziranga – One of the greatest wildlife emblems of the country, the UNESCO World Heritage Site of Kaziranga National Park, is famed as a home to two-thirds of the world’s population of the rare one-horned rhinoceros. With the mighty Brahmaputra river lapping at the fringes, the park encompasses wetlands, forests and grasslands, which shelter a sizeable population of tigers as well. Moreover, the park is an abode of world-famous snakes – the rock python, the reticulated python and the king cobra, the longest venomous snake. While eastern swamp deer and wild water buffalo are common sights, if you’re lucky, you can also spot a herd of elephants making their way grandly through the park. The park is surrounded by ancient temples, pristine waterfalls and lush tea estates.

The Kamakhya Temple – is a Hindu temple dedicated to the mother goddessKamakhya, one of the oldest of the 51 Shakti Pitha.s, Situated on the Nilachal Hill in western part of Guwahati city in Assam, India it is the main temple in a complex of individual temples dedicated to the ten Mahavidyas:Bhuvaneshvari, Bagalamukhi, Chinnamasta, Tripura Sundari, Tara, Kali, Bhairavi, Dhumavati, Matangi andKamala. Among these, Tripurasundari, Matangi and Kamala reside inside the main temple whereas the other seven reside in individual temples. It is an important pilgrimage destination for general Hindu and especially for Tantric worshipers.

MEGHALAYA, History and Geography:
Meghalaya was created as an autonomous state within the state of Assam on 2 April, 1970. The full-fledged State of Meghalaya came into existence on 21 January, 1972. It is bound on the north and east by Assam, and on the south and west by Bangladesh. Meghalaya, literally meaning the abode of clouds, is essentially a hilly state. It is predominantly inhabited by the Khasis, the Jaintias, and the Garo tribal communities. The Khasi Hills and Jaintia Hills, which form the central and eastern part of Meghalaya, is an imposing plateau with rolling grasslands, hills and river valleys. The southern face of the plateau is marked by deep gorges and abrupt slopes, at the foot of which, a narrow strip of plain land runs along the international border with Bangladesh.
Area – 22,429 sq. km, Population – 29,64,007, Capital – Shillong, Languages – Khasi, Garo and English.

Umngot River or Dawki stream – is a little waterway that courses through Dawki in the East Jaintia Hills. Its a completely clear waterway which is uncommon to discover in India, one can see the whole impression of the watercraft and it gives the inclination that the vessel is flying. The stream closes at the global outskirt of India Bangladesh. The characteristic magnificence of Dawki is framed by the Umngot River as it were. The stream in Dawki is additionally a prime angling spot. One can take a watercraft ride in this waterway, the ride keeps going upto a decent 30 to 40 mins and it is extremely wonderful. The waterway is the normal limit between Ri Pnar of Jaintia Hills with Hima Khyrim of Khasi Hills over which hangs a solitary traverse suspension connect. It is the portal to Bangladesh.

Mawlynnong – one of the cleanest villages in India is located about 92 km from Shillong. In 2003, it won the acclaim for being the cleanest village in Asia and another for being the cleanest in India in 2005. The village is locally referred to as ‘God’s Own Garden’ and is commended for its community-based eco-tourism initiative. Under this, the onus of keeping the village clean lies on every resident and to promote cleanliness, bamboo garbage bins dot the lanes, nooks and corners of Mawlynnong. The waste collected in the bins is sent to a pit and turned into manure. Smoking is prohibited here and so is plastic. Rainwater harvesting is considered very important and is practised by almost all its residents. In addition, the village boasts a 100 per cent literacy rate and most of the inhabitants are fluent in English. Since it is located on the Indo-Bangla border, one can enjoy a sweeping view of Bangladesh. Another reason to mark this place in your itinerary is the natural rock balancing phenomenon that is seen here – the unusual and curious sight of one boulder balanced on another. Tourists can also enjoy a trek to a single-decker living root bridge here.

A Living Root Bridge – are a form of tree shaping common in the southern part of the Northeast Indian state of Meghalaya. They are handmade from the aerial roots of living banyan fig trees, such as Ficus elastica by the Khasi people and War Jaintia peoples of the mountainous terrain along the southern part of the Shillong Plateau. The pliable tree roots are made to grow through betel tree trunks which have been placed across rivers and streams until the figs’ roots attach themselves to the other side. Sticks, stones, and other objects are used to stabilize the growing bridge This process can take up to 15 years to complete. The useful lifespan of any given living root bridge is variable, but it is thought that, under ideal conditions, they can in principle last for many hundreds of years. As long as the tree they are formed from remains healthy, they naturally self-renew and self-strengthen as their component roots grow thicker.
Material – Living trees roots, Width – over 1.5 meters, Total length – over 50 meters, Design life – up to 500 years.

Mawsmai Caves – Situated around 6 Kms from Cherrapunjee, the Mawsmai Caves are a major crowd puller that leaves tourists spellbound. These  limestone caves have the distinction of being the only caves in Meghalaya that are lit enough to enable tourists to enjoy the natural formations in awe. Though the caves are long, only a distance of 150 meters is open for tourists, while the other section is closed. The stalactites and stalagmites caves have innumerable forms, shapes and sizes inside leaving one to imagine as many life forms as possible. This magnificent natural wonder is the handiwork of years of natural abrasion and underground water.