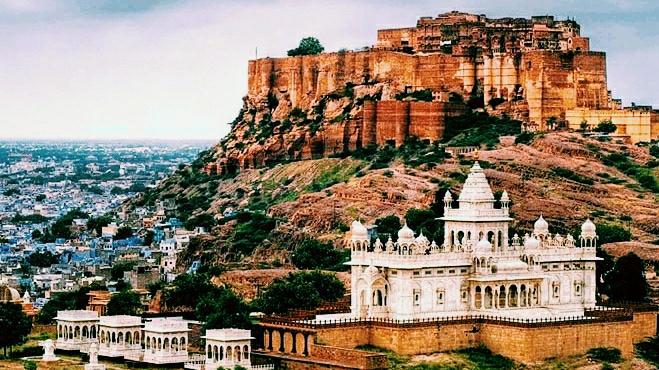 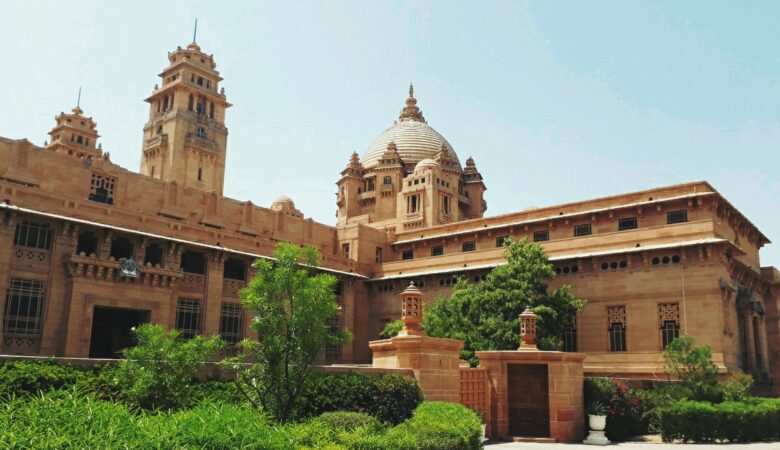 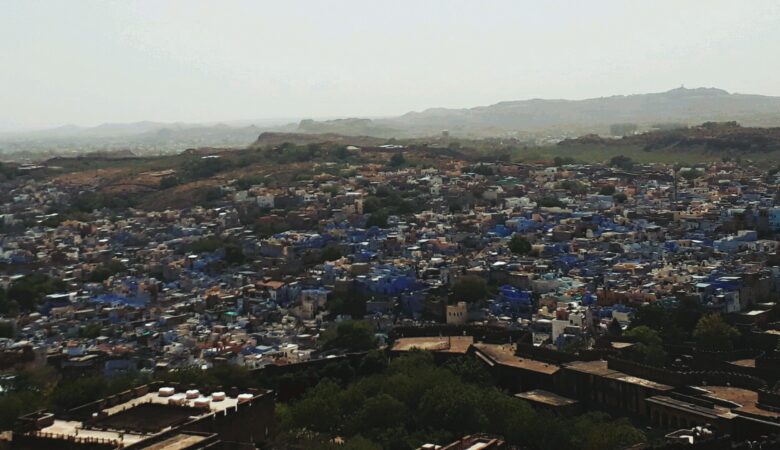 Arrive at Jodhpur – The Blue City of Rajasthan, on arrival at Jodhpur airport or railway station proceed by your private transfer to check in the hotel. Thereafter proceed to visit Umaid Bhawan & Jasawant Thada. Evening is at leisure. Overnight stay at hotel, Jodhpur.

After early breakfast check out & transfer to Jaisalmer – The Golden City of Rajasthan. Reach & check in Tent. Evening enjoy the Camel Ride & Thar safari on Sand Dunes (on own). Enjoy the Cultural Rajasthani Folk Show at the Camp.  Dinner & overnight stay in tent.

After breakfast check out & transfer to Jaisalmer city. Visit Jaisalmer fort – where you can view Jain Mandir, Patwon Ki Haweli and Nathmalji Ki Haweli. Later trasnfer to hotel for check in. Overnight stay at hotel, Jaisalmer.

After breakfast check out & transfer to Jodhpur Airport / Railway station to board the flight / train to your hometown. Connect with us in contact & social media.

At Bikaner – Hotel Chirag or similar

JODHPUR: The first luxury train of India, the Palace on Wheels offers you a chance to explore another desert kingdom of Jodhpur on Saturday, during its itinerary. Famous for its magnificent forts and palaces, Jodhpur is the second largest city of Rajasthan and a major tourist attraction in the country. Situated at the edge of the Thar Desert, it was founded by Rajput chief Rao Jodha in the year 1459. The erstwhile capital of the kingdom of Marwar, Jodhpur is dotted with a number of tourist attractions including forts, palaces, museums, and much more. Also known as the ‘Blue City’ or the ‘Sun City’, it is strategically placed on the road that links Delhi to the western Indian state of Gujarat.
Area-112.40 square km, Established On-1459, Founded By–Rao Jodha, chief of the Rathore clan Language Spoken– Hindi, Marwari and Rajasthani

Mehrangarh Fort – holds the pride of place in Jodhpur because of its splendid architecture and the diverse history associated with it. Considered as one of the most formidable and magnificent forts of Rajasthan, Mehrangarh fort was built by Rao Jodha in the year 1459. The fort is spread over an area of 5 km and is built on 125 m high hill in the outskirts of Jodhpur city. There are seven gates, which can be used to enter the Mehrangarh fort. These 7 gates are made by different rulers, and are built in honour of victory over Bikaner and Jaipur armies. One can see the panoramic view of the Jodhpur city from this fort, which seems like a blue carpet laid at the foot of a hill. Every ruler of Jodhpur has contributed in the making of this fort. Within the fort one can see the magnificent palaces. The main palaces located in the Mehrangarh Fort are Moti Mahal, Phool Mahal, Sheesh Mahal, Zenana Dude, Takht Vilas and Jhanki Mahal. There are also two temples located inside the fort – Chamundi Devi Mandir and Nagnechiaji Mandir, dedicated to Goddess Durga and the Kuldevi respectively. There is also a museum within the Mehrangarh fort, which exhibits a rich collection of palanquins, musical instruments, royal cradles, costumes, arms, furniture and paintings.

Umaid Bhawan Palace – is the largest private residence in the world. There are 372 rooms, wood-panelled library, private museum, indoor swimming pool, billiards room, tennis courts and unique marble squash courts. All these things make Umaid Bhawan Palace one of the most magnificent structures in the city. The palace was built with a purpose to employ the farmers of Jodhpur. It was made between 1928 and 1943 under the reign of Maharaja Umaid Singh. The Umaid Bhwan Palace was designed by the renowned architecture, Henry Lanchester, and shows a blend of eastern and western architectural influences. Its majestic 105 – foot high cupola is influenced by the Renaissance, while the towers draw inspiration from Rajput tradition. The main attractions of Umaid Bhawan includes a collection of vintage cars, clocks and banners gifted by Queen Victoria, artefacts belonging to the royals, cutleries, trophies and weapons.

Jaswant Thada – is a 19th century royal cenotaph located to the left of the Mehrangarh Fort complex. It was built by Maharaja Sardar Singh to commemorate his father Maharaja Jaswant Singh II, the 33rd Rathore ruler of Jodhpur. A beau ideal of architectural excellence, it is a white marble memorial built out of intricately carved sheets of marble; in fact, the faade seems to shine when hit by sunlight. Today, Jaswant Thada serves as a museum and gallery of sorts, displaying memorabilia, including paintings and portraits of the rulers of Jodhpur, to the public. The grounds of the thada serve as a venue for morning concerts during music festivals such as the Rajasthan International Folk Festival and the World Sacred Spirit Festival, prompting thousands of tourists to flock to the city in search of recreation and musical enlightenment.

JAISALMER: Popularly called as the “Golden City”, Jaisalmer is one of the most famous destinations in the state of Rajasthan. Situated in the westernmost region of Rajasthan, the town is known for its location right in the middle of Thar Desert. Tourists love going out for a Desert Safari amidst the vast sand dunes of the desert. Jaisalmer stands mighty and proud and welcome tourist from all over the world to get accustomed to her magical world of color, history and fable.
Area: 38,201 sq. km, Founded on: 1156 AD, Founded by: Maharawal Jaisal Singh, Languages Spoken: Hindi, English, Urdu and Rajasthani,

Jaisalmer Fort – is locally known as Sonar Quila is one of the largest forts in the world located in Jaisalmer city in Rajasthan, India. It was built in 1156 AD by the Bhati Rajput ruler Rao Jaisal, from where it originates its name. This fort is popularly known as the ‘Sone Ka Quila (Golden Fort)’ by the local people and is one of the most magnificent monuments in the city of Jaisalmer. The fort is standing proudly in the middle of the unending golden sands of Thar Desert, Jaisalmer Fort is a World Heritage Site declared UNESCO under the group Hill Fort of Rajasthan situated in the city of Jaisalmer in Rajasthan, India. Fort was built by the Rajput ruler Rawal Jaisal in 1156 AD, from whom it derives its name. (Rawal Jaisal’s son was Shalivahan II; Manj and Bhati Rajputs are descended from him.) Jaisalmer fort stands amidst the sandy expanse of the great Thar desert, on Trikuta Hill, and has been the scene of many battles. Its massive yellow sandstone walls are a tawny lion color during the day, fading to honey-gold as the sun sets, thereby camouflaging the fort in the yellow desert. For this reason, it is also known as the Sonar Quila or Golden Fort.

Patwon ki Haveli – Near the city center is the Patwon ki Haveli, built by Guman Chand Patwa and his five sons, dealers in brocade, gold and silver embroidery with business stretching between Afghanistan and China. The five suites built between 1800 and 1860 are virtually the showpiece of Jaisalmer’s legendary architectural wealth. The carving on stone far surpasses in beauty the work on brocade and gold. The balconies are so delicately chiselled you would stand mesmerized by the splendour of it all, particularly when viewed early in the morning or in late afternoon. Oblique sunrays create enchanting and dramatic shadows, highlighting the carving and infusing a new life of its own. It is the grandest mansion in Jaisalmer, a veritable museum piece in the open.

Jain Temple – Constructed by Jain Hermits, the Diwala style Jain temples of Jaisalmer are ancient temples, which were built during the 12th century. They are counted amongst the best of Jain temples all around the world, mainly because of their unique architecture. The walls of this group of temples are covered with beautiful figures of people and animals. Placed within the complex of the Jaisalmer fort, the Astapadhi Temple is one of the most popular ones.

BIKANER: The city gets its name from Rao Bika, a Rajput of the Rathor clan, who founded it in 1488 AD. From its small origins, today it has developed into the fourth largest city in Rajasthan. If ever beauty has bloomed in a desert, it has been at Bikaner. The imposing palaces, beautiful and richly sculptured temples of red and yellow sand stones display some of the finest creations of Rajput civilization. Bikaner retains the medieval grandeur that permeates the city’s lifestyle. More readily called the camel country, the city is distinguished for the best riding camels in the world.

Junagarh Fort –  is very special because it is one of the few fort which is not built on a hill this fort is surrounded by the Thar desert and is also famous for its marvelous structure and hand carvings done on the walls of the Junagarh Fort. The foundation of this fort was laid by Rao Bika of the Rathore Clan.The temples and palaces inside the fort are preserved as museums to provide insight into the grandiose living style of the past Maharanas of Rajasthan.

Lalgarh Palace – This Palace was built from 1902 to 1926 by the Maharaja of Bikaner after he was highly influenced by the Britishers and their architecture. The Massive architecture of this palace reflects the different styles from the Rajput, Mughal and European dynasties. This marvelous Palace is a treat to the sore eye in the dry and arid region of Rajasthan.

Karni Mata Temple – or the famous Rat temple of Rajasthan is situated 30 km away from Bikaner which is a mandatory kind of a place to visit while visiting Bikaner. The locals will be quick to point that the creatures running around in the temple are not rats, they are called kaabe. Kaabe are believed to be reincarnations of human beings who had been devoted their lives to Karni Mata.

Camel Breeding Farm – It is a farm engaged in research on camels. It is located about 8 km from Bikaner. This is one of its kind institutes in India. The farm is complex of cables stables and enclosures and buildings. One can enjoy camel ride or ice cream made of camel milk. The farm permits tourists at certain hours of the day. It is interesting to watch camel calves gamboling around and also camels returning from a day out in the desert. It is also known as Camel Breeding Farm and was established in 1984 by the central government.