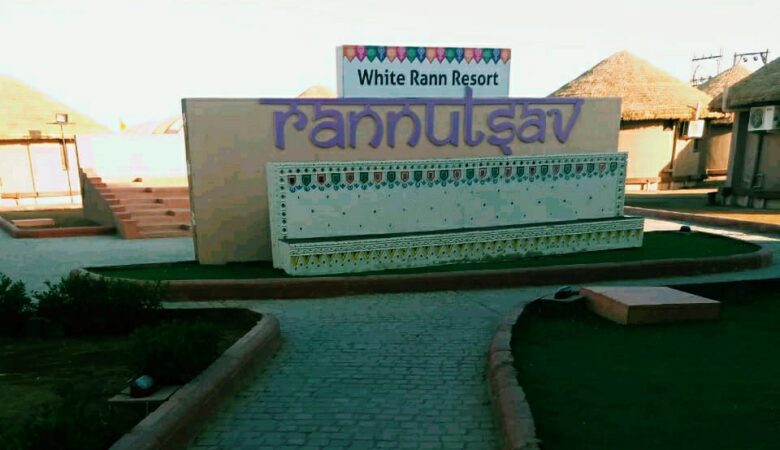 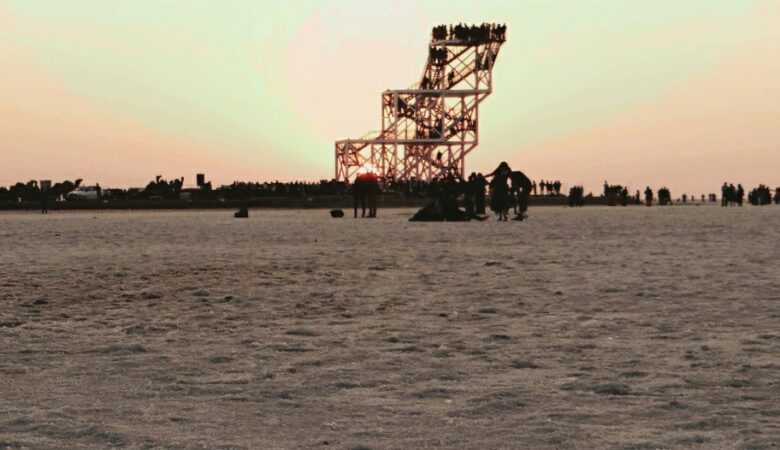 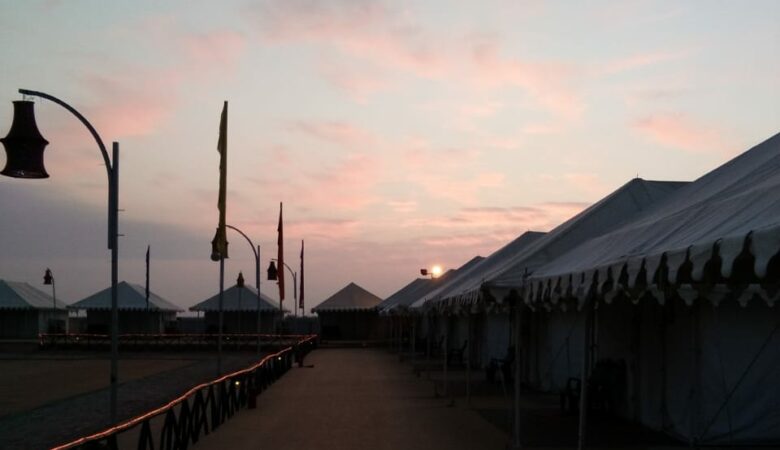 Board train no. 22955 Kutch Express. Departs from Bandra Terminus at 1745hrs. Dinner will be served on train. Overnight in train.

After breakfast check out & proceed to visit Dholavira – which is the excavations site depicting the 4500-year-old Harappan culture. On your way to Bhuj visit India Bridge & Kalo Dungar. Reach Bhuj by late evening & check in hotel. Dinner & overnight stay at hotel, Bhuj. 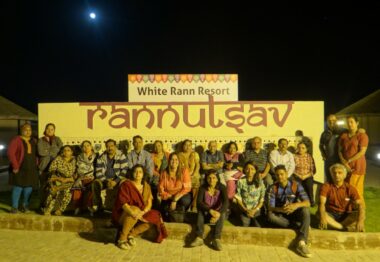 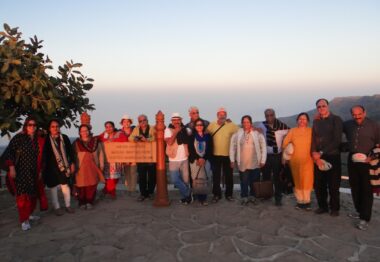 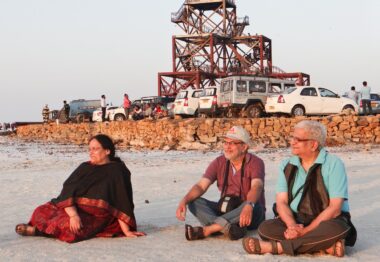 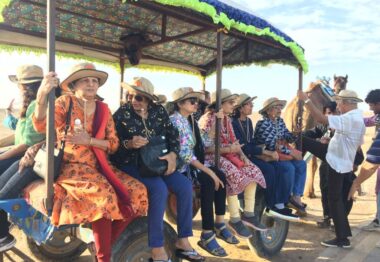 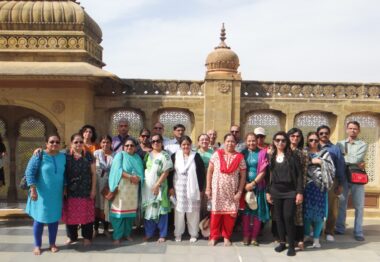 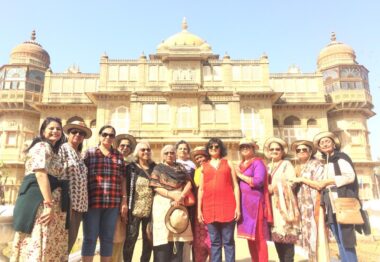 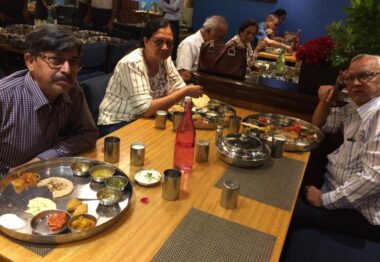 In the second inning of my life. I felt I should fulfill my wish of traveling & exploring new destinations. Among all the travel companies, we selected “Avenues Around The World” along with my three friends I gone to Rann of Kutch. Meticulous planning, deluxe hotel stay, personal touch, ample time for shopping & full entertainment. All the specialties & verities of food items from Gujarat were served.
In all it was great experience & the most memorable!!!

Tour was organised so well. We really had a great time at Rann.

Tour was beautiful. One the best I have experienced!!!

Very well organised tour. Excellent arrangements on every count – accomodation, food, travel, places covered and all. Supriya and Sameer are perfect tour operators and more than helpful in every aspect. Would highly recommend them to each and every one. I am already planning my next tour with them

Aina Mahal – It was built by Rao Lakhpatji in 1761.The chief architect and designer of Aina Mahal was Ram Singh Malam, who was assisted by local builder community (Mistris of Kachchh) in construction. It was constructed with marble walls adorned with gold lace and glass. The walls of the palace are of white marble covered with mirrors separated by gilded ornaments with shades of Venetian glass. The palace was damaged in the 2001 Gujarat earthquake. However, a portion of the palace which was not so badly damaged has been restored and it houses the museum, displaying the bedroom, music room, court room and other old pieces of arts, paintings, arms, palanquin etc.

Prag Mahal – Next door to the Aina Mahal, in the same walled compound, is the giant Prag Mahal. This is a palace commissioned by King Pragmalji in the 1860s, designed by Colonel Henry Saint Wilkins in the Italian Gothic style and built in the middle of Bhuj next to the Aina Mahal. In the courtyard behind the palace, there is a small Hindu temple with very nicely carved stonework. Inside the palace, you can visit the main palace halls as well as climb stairs of the 45m bell tower for an exhilarating view of the city. After coming down (not before, for your own peace of mind!), check out the cracks between the stones in the wall, visible from the courtyard, caused by various earthquakes over the years.

Vijay Vilas Palace – Built in 1929 by Rao Vijayrajji, this palace is very well-maintained, and often the scene of filming for Bollywood productions. It was built of red sandstone in the Rajput style, with a main central dome, Bengal domes at the sides, bastions at the corner, and colored glass windows. The balcony at the top affords a superb view of the surrounding area, and the king’s tomb can also be seen.

Shyamji Krishna Verma Memorial – The British ruled over India for over two hundred years. They ruthlessly exploited India’s economic resources and mercilessly oppressed the people. Many individuals took on the might of the British to free India. Shyamji Krishna Varma chose to take this fight to British soil and made London his base. Shyamji Krishna Varma was born on 4th October, 1857 in Mandvi town of Kachchh district of Gujarat. He was one of the foremost freedom fighters in the history of the freedom movement of India with high sense of patriotism and selfless service for the nation. He had organized a revolutionary center in “India House” at London and propagated the cause of India’s independence through his writings in his publication journal called The “Indian Sociologist”. Shyamji Krishna Varma was not alone in his work. He was joined by many other great radical Indian Nationalists who were committed to free their motherland from the yoke of British rule. Many great revolutionaries made the supreme sacrifice and laid down their lives to see their country free, both in India as well as abroad. The Memorial’s objective is to pay tribute to the contribution of Shyamji Krishna Varma and also to educate the young generation about those great Indians who sacrificed everything for the country’s freedom.

The Vande Mataram Memorial – is a unique national Monument seeking to immortalize the most momentous episodes in India’s freedom struggle from British Rule. Vande Mataram uses a combination of art; architecture and technology to create an immersive experience which helps us re-live the journey to India’s independence first-hand. India’s journey to independence and the sacrifices of our countrymen to attain it cannot simply be relegated to the pages of history; they need to be experienced, to be re-lived and to echo in our hearts and souls for eternity – that is what the Vande Mataram Memorial has set out to achieve. Vande Mataram is a once-in-lifetime and a must-do experience for every Indian who is keen to reconnect with his roots and who seeks to renew and restore his sense of national pride and belonging. The Vande Mataram Memorial is build by Ashapura Foundation and is located over a 12 acre complex at Bhujodi – Bhuj (Kachchh), Gujarat and is a non-profit initiative of the Ashapura Group; the primary structure of the museum admeasuring over 100,000 square feet is modeled on the likeness of the “Sansad Bhavan” (the Indian Parliament Building) and was constructed over 4 years with a mélange of inputs from prominent historians, architects, sculptors and artists.

Kalo Dungar (Black Hills) – the top of the Black Hills is the highest point in Kachchh, at 462 m. From here, the entire northern horizon vanishes into the Great Rann, the desert and sky often becoming indistinguishable. It is one of the few non-coastal locations where you feel like you are at the edge of the earth, on the brink of incomprehensible vastness that fades off towards infinity. Looking out from the Black Hills, you can understand the tremendous effort that those who undertake the crossing of the Great Rann have to make. Since this is one of the places where a civilian can get closest to the Pakistan border, there is an Army post at the top; beyond here, only military personnel are allowed. The hill is also the site of a 350-year-old temple to Dattatreya, the three-headed incarnation of Lord Brahma, Lord Vishnu and Lord Shiva in the same body. Legend says that when Dattatreya walked on the earth, he stopped at the Black Hills and found a band of starving jackals. Being a god, he offered them his body to eat and as they ate, his body continually regenerated itself. Because of this, for the last four centuries, the priest at the temple has prepared a batch of prasad that is fed to the jackals after the evening aarti.

Handicrafts – The rich and diverse creative traditions of Kachchh live at the intersection of cultures and communities. Once a destination by land and sea for people from Africa, the Middle East, and the Swat Valley, Kachchh has a rich tradition of sea trade from Mandvi and a global connection. A river system was shared between Kachchh, Sindh and Rajasthan. As a border state, Kachchh is constantly absorbing cultures from the north, west, and east. Kachchhi motifs can be traced to the ancient Harappan civilization, yet craft is developing and growing with the innovative and entrepreneurial drive of spirited artists.
Kachchh is world renowned for its mirrored embroideries. Most of these were traditionally stitched by village women, for themselves and their families, to create festivity, honor deities, or generate wealth. While embroideries contributed to the substantial economic exchange required for marriage and fulfilled other social obligations which required gifts, unlike most crafts, they were never commercial products. Embroidery also communicates self and status. Differences in style create and maintain distinctions that identify community, sub-community, and social status within community. The “mirror work” of Kachchh is really a myriad of styles, which present a richly textured map of regions and ethnic groups. Each style, a distinct combination of stitches, patterns and colors, and rules for using them, was shaped by historical, socio-economic and cultural factors. Traditional but never static, styles evolved over time, responding to prevailing trends.

Rogan Art –  is the technique of painting on fabric, crafted from thick brightly coloured paint made with castor seed oil. Castor is a local crop grown in Kachchh, and artists most likely sourced it from farmers originally. Artisans place a small amount of this paint paste into their palm. At room temperature, the paint is carefully twisted into motifs and images using a metal rod that never comes in contact with the fabric. Next, the artisan folds his designs into a blank fabric, thereby printing its mirror image. While design used to be more rustic, over time the craft has become more stylized and now is a high art.

Copper Bells –  are hand cast in a variety of shapes and sizes displayed singularly or in a group to perform musical functions. The sound of each bell is set with an instrument called ekal­. The tonal quality and the resonating sound are dependent on three factors inherent to the making. The shape and size of the bell, along with the wooden thong sourced from the local Khirad tree determines the sound it imparts. The structure and curvature of the bottom which is delicately beaten into shape using a harmonic hammer resonates the sound deepening its after glow. Bells chimed their way into Kachchh from Sindh centuries ago, tied to the necks of migrating cattle.