STATUE OF UNITY WITH VADODARA & AHMEDABAD 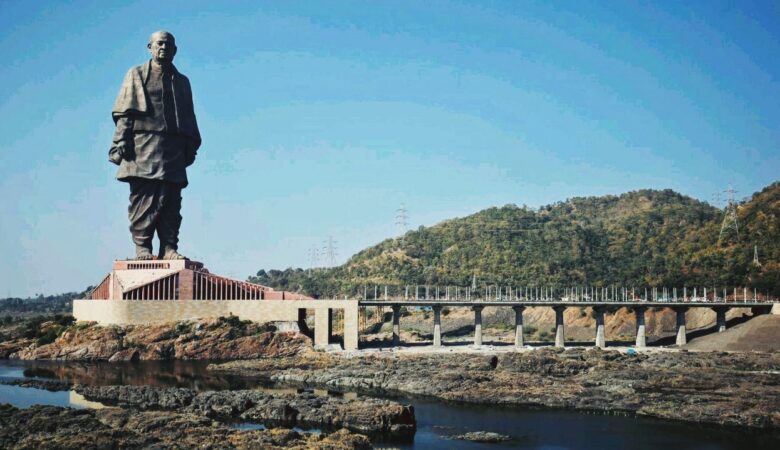 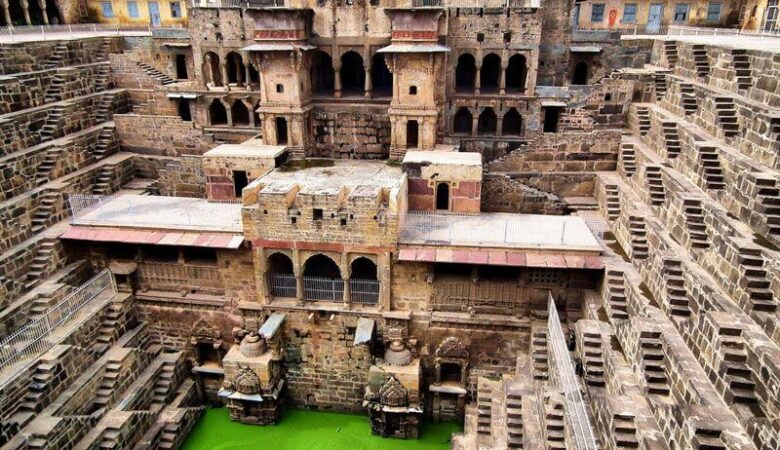 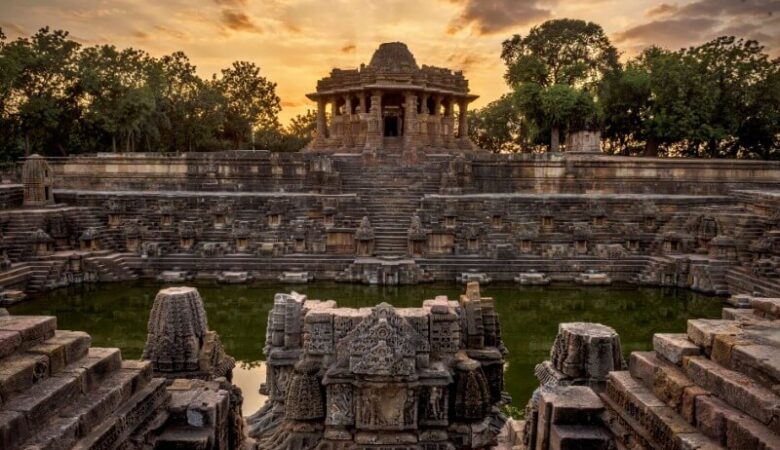 Arrive at Ahmedabad Airport/ Railway station & proceed to visit Rani ki vav a stepwell situated in the town of Patan. Located on banks of Saraswati river. Thereafter transfer to Modhera village to visit Sun temple is situated on the bank of the river Pushpavati. Back to Ahmedabad by evening. Check in hotel for overnight stay, Ahmedabad.

After breakfast check out & transfer to Statue of Unity, Kevadiya. Enroute visit Garudeshwar temple. Reach Tent city & check in. After lunch proceed for sightseeing. Visit Zoo, Valley of flowers & Statue of Unity (The tallest statue in the world, 182mtrs.) Evening enjoy the Laser show with sound effects on statue. Return to tent city for dinner followed by a cultural show. Overnight stay in Ac Tent.

After breakfast check out & transfer to Ahmedabad Airport / Railway station. 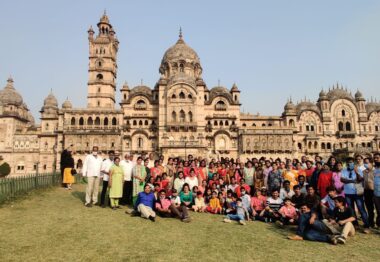 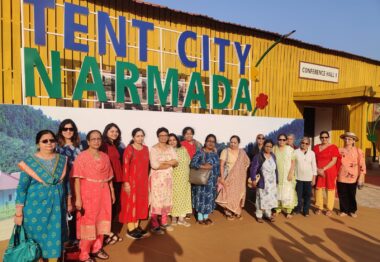 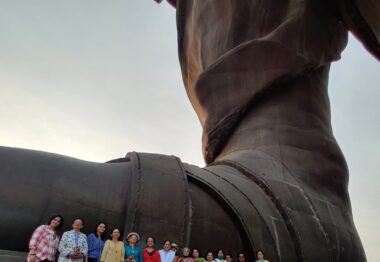 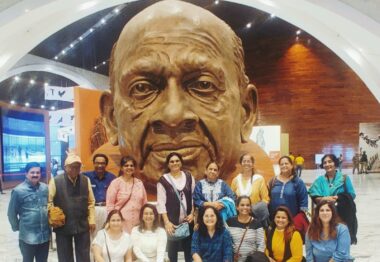 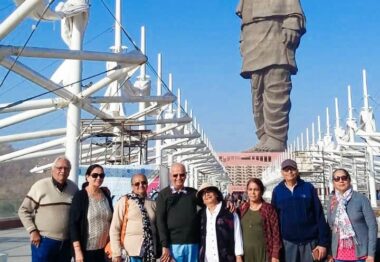 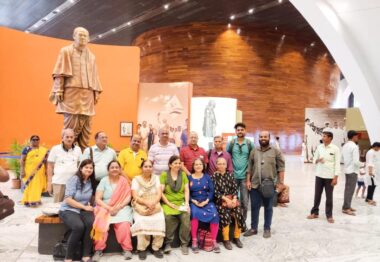 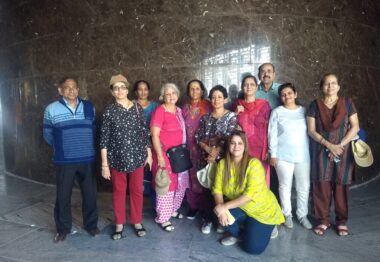 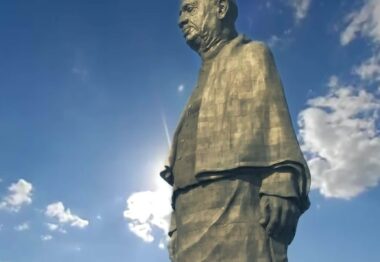 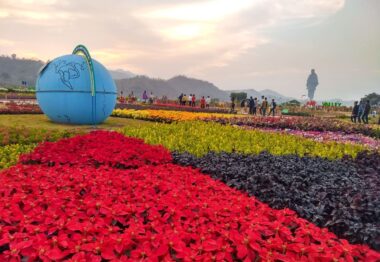 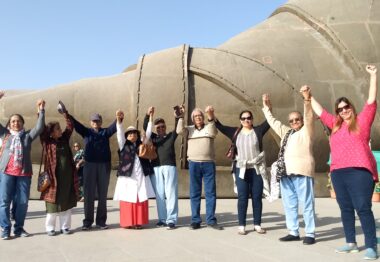 At the foot of the SoU 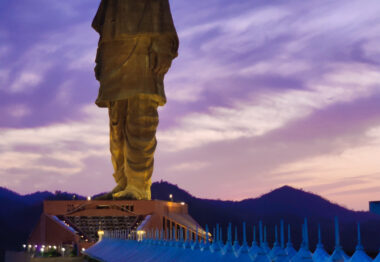 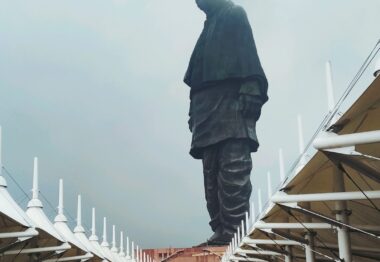 The Iron man surrounded by clouds

The Statue of Unity – is the world’s tallest statue with a height of 182 metres. A huge exhibition hall covering an area of 4,647 square metres has been set up in the pedestal of the Statue of Unity. The hall showcases the life of Sardar Patel, his contributions to the Freedom Movement against British rule and his role in the merger of princely states. The Shoolpaneshwar Wildlife Sanctuary, the life and culture of the tribal people of Gujarat and the Sardar Sarovar Dam are also displayed through an Audio-Visual show. The monument also boasts of a viewing gallery at 135m height at the chest of the statue with a capacity of 200 tourists at a given time. A Light and Sound show using laser technology projected on the Statue of Unity takes place every evening except Monday. The colourful laser lighting system is accompanied by an excellent narration of the history and life of Sardar Patel, his contribution to the Independence Movement and the unification of India as one nation.

Sardar Sarovar Dam – is one of the world’s largest concrete gravity dam which is 1.2 kms long and 163 mts hight from its deepest foundation level. It has 30 radial gates weighing about 450 tonnes each.

The Jungle Safari –covers 558,240 square metres on the right bank of the Narmada River, about 2 kilometre from the SoU. The park will be home to more than 400 species of fauna, covering various biomes of Africa, Australia, Asia and America. Visitors will also be able to spot India’s endangered species, which includes the magnificent big cats such as Asiatic lion, Royal Bengal Tiger and Leopard. The safari route has been designed such that the visitors can view animal activities, spot reptiles and watch birds.

The Butterfly Garden – at Valley of Flowers amidst the Vindhyas and Satpura ranges, along the banks of Narmada, makes it an attractive spot to appreciate the assortment of these flying jewels. The garden harbours more than 80 species of butterflies. The garden will cover 6 acres of area with 150 species of plants and 38 species of butterflies. The park is host to more than 150 species of larval host plants and nectar plants to attract variety of butterfly species. Special care has been taken in the landscaping of the park to support the diversity of butterfly species. Walk through this beautifully designed park to get close view of stunning butterflies. Explore different butterfly species that inhabit the garden, Identify the plant species and learn about their unique features, also observe the preferences of each species for its specific nectar plant and larval host plant, and one can look for the species gathering around the puddling area and certain sap/alkaloid producing plants.

The Cactus Garden – is a unique botanical garden at the Statue of Unity site, created to exhibit a huge variety of Cacti, the true miracles of adaptation. The thought behind the development of the cactus garden is to provide an experience of the desert ecosystem in the midst of a landmass well entrenched in an aquatic surroundings. There are 30000 plants of 350 species spread across 20 acres of land. A grand architectural greenhouse – ecological habitat of nearly 400 national and international species of cacti and succulent plants. These cacti and succulent species represent their origin in 17 countries of the world mainly from North & South America and African continents. Beautiful rockery showcasing distinct flora in its richness. Ravishing landscape of colourful cacti and succulent plants. Educational and learning opportunity for students and enthusiasts to explore the nature’s wisdom.

Rani ki Vav – Rani ki Vav aka the Queen’s Stepwell situated on the banks of Saraswati River in Gujarat is one of the largest stepwells of its kind in the country. This 900-year old structure is located about 125 km from Ahmedabad, in Patan, which was a fortified city in medieval times. Even though stepwells were constructed in India since 3rd BC as a means of storing water, Rani ki Vav is much more than that. It has gained huge popularity due to its elaborate seven-storied structure and intricately carved sculptures of gods, goddesses, and  deities.

Sun Temple Modhera – Sun Temple at Modhera is one of the few shrines that are dedicated to the Sun God. Situated on the banks of Pushpavati River in Modhera, Sun Temple is easily accessible from Ahmedabad, the largest city of Gujarat. The nearest station to Modhera is located at Ahmedabad, which lies at a distance of 102 kms. Regular bus services are also available from Ahmedabad to Modhera. The nearest Railway station is sited at Mehsana, with a mere run of 25 kms.In 1026, the temple was built by King Bhimdev of the Solanki dynasty (believed to be the descendants of the lineage of Sun God). This ancient temple revives the reminiscences of Sun Temple at Konark in Orissa. Turning in the pages of history, one can notice the mention of Modhera in the scriptures like Skanda Purana and Brahma Purana. The surrounding area of Modhera used to be known as Dharmaranya (forest of righteousness) and the place was blessed by Lord Rama.