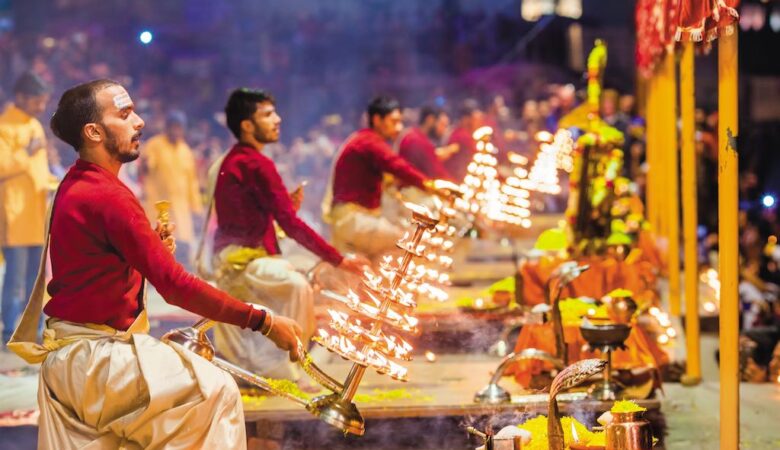 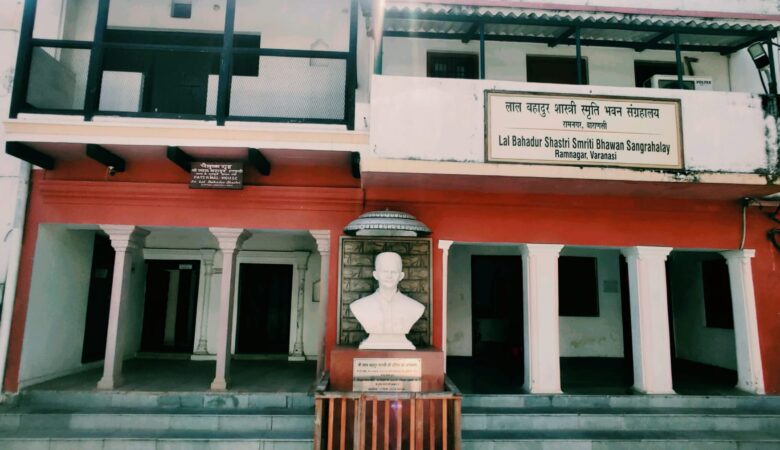 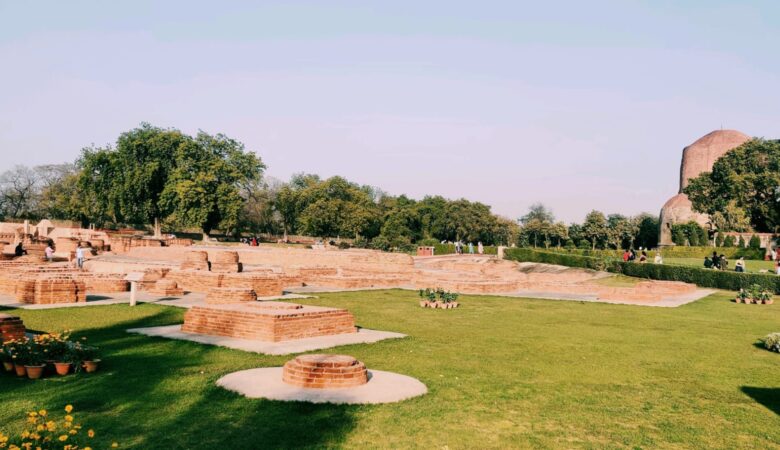 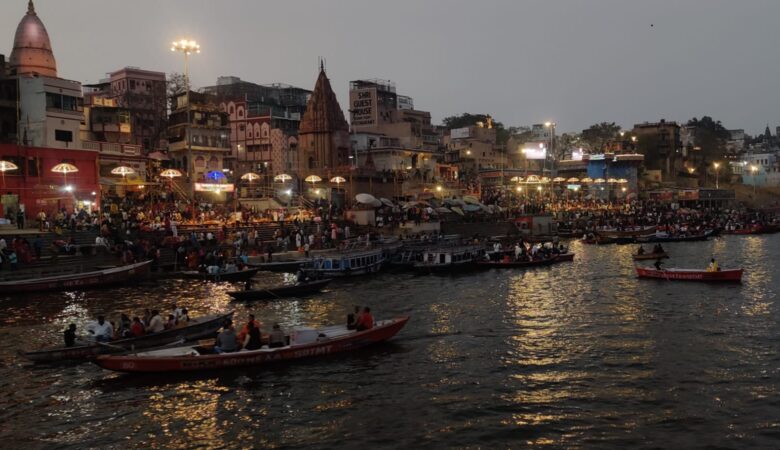 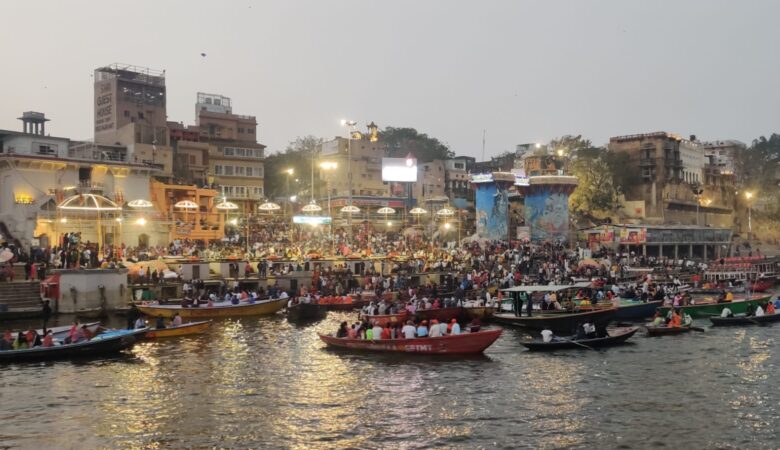 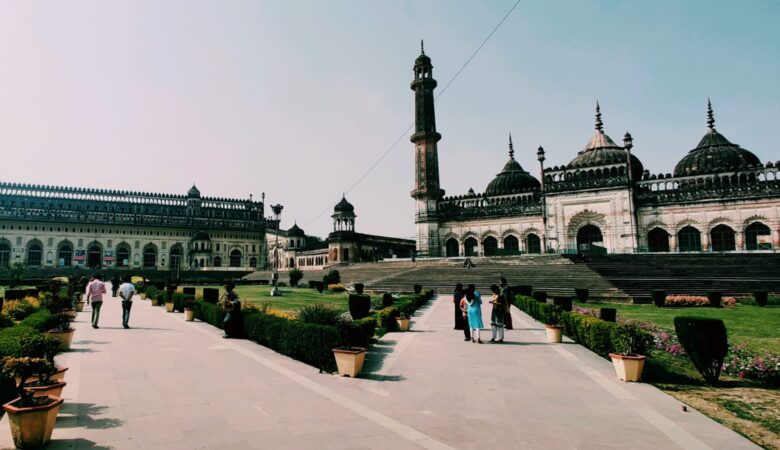 Pick up from Varanasi airport & transfer to hotel. Reach & check in. Proceed to visit Lal Bahadur Shashtri House (2nd Prime Minister of India) & evening takes a boat ride tour to takes all 84 ghats. After sundown have a glimpse famous Ganga aarti of Dashashwamedh ghat. Return back to hotel for dinner & overnight stay, Varanasi.

After breakfast transfer to Prayagraj – situated at the confluence of river Ganga, Yamuna & Gupt Saraswati. Arrive at Prayagraj & visit Anand Bhuvan – is the former residence of Nehru family which has now been transformed into a museum. After lunch, visit “Lete” Hanuman Temple – it is located very close to Sangam. The shrine is an underground pit which houses an enormous image of God Hanuman in a lying position. This is the only God Hanuman temple in the world where the idol is in reclining position. Thereafter enjoy boat ride at Triveni Sangam. Return back to Varanasi. Dinner & overnight stay at hotel, Varanasi.

After breakfast check out & transfer to Ayodhya – an ancient city of India. The birthplace of God Rama! Reach & visit Kanak Bhawan also meaning Golden Palace – it is believed that this shrine gifted to Rama & Sita by the former’s stepmother, Kaikeyi. Dhasharath Mahal – is the original residence of King Dasharath. Believed to have housed God Ram’s childhood & King Dasharath’s capital, this palace hosts a decorated & ornamented entrance with beautiful paintings. Ram ki Paidi – is a series of ghats on the bank of River Sharayu. Thereafter transfer to hotel & check in Return back to hotel for dinner & overnight stay, Ayodhya.

After breakfast check out & proceed to visit Sri Ram Janmabhoomi – is one of the major attractions in Ayodhya. The place is considered to be the birthplace of God Rama the 7th incarnation of God Vishnu. Visit Hanuman Garhi – 10th century temple dedicated to God Hanuman, one of the most famous temples in Ayodhya. Lunch will be served enroute. Transfer to Lucknow. Reach & check in hotel. Evening free for shopping!!! One can also enjoy local food. Return back to hotel for dinner & overnight stay, Lucknow.

After breakfast Check out & proceed for local sightseeing of Lucknow. Visit British Residency of Lucknow served as a refuge for several Britishers during the uprising in 1857. Rumi Darwaja – was built in 1784-86 and is 60 feet high, with no visible supporting fittings. It is also known as the Turkish gate & displays Awadhi Architectural style. Bada Imambara – is one of the famous monuments of the city, known as Bhul bhulaiya locally, also known as Asfi Imambara. Lunch will be served at local restaurant. Transfer to Lucknow airport to board flight for return journey. 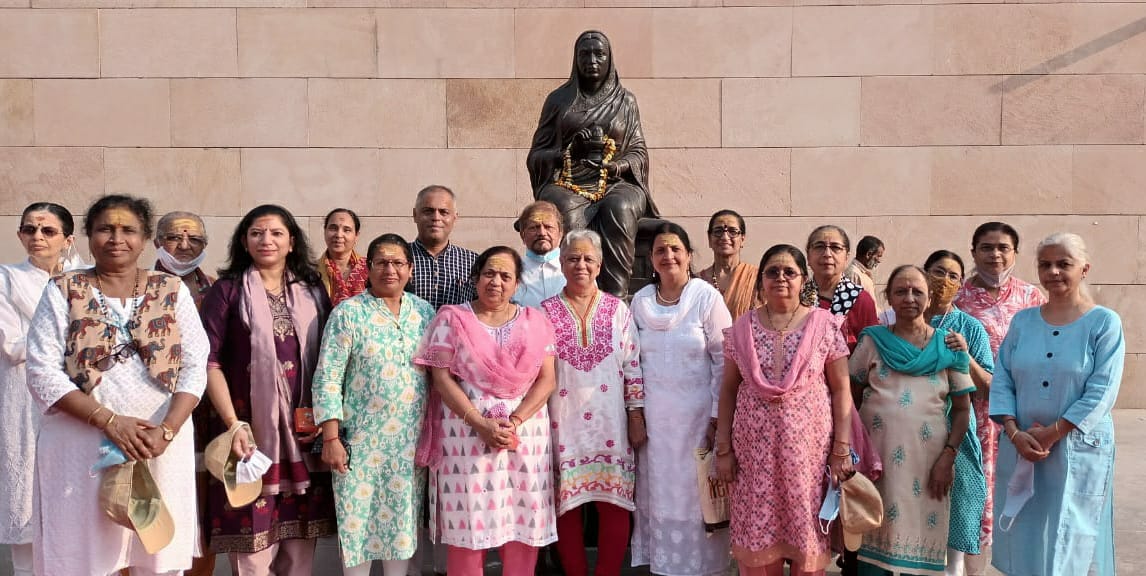 Standing by the river Sarayu 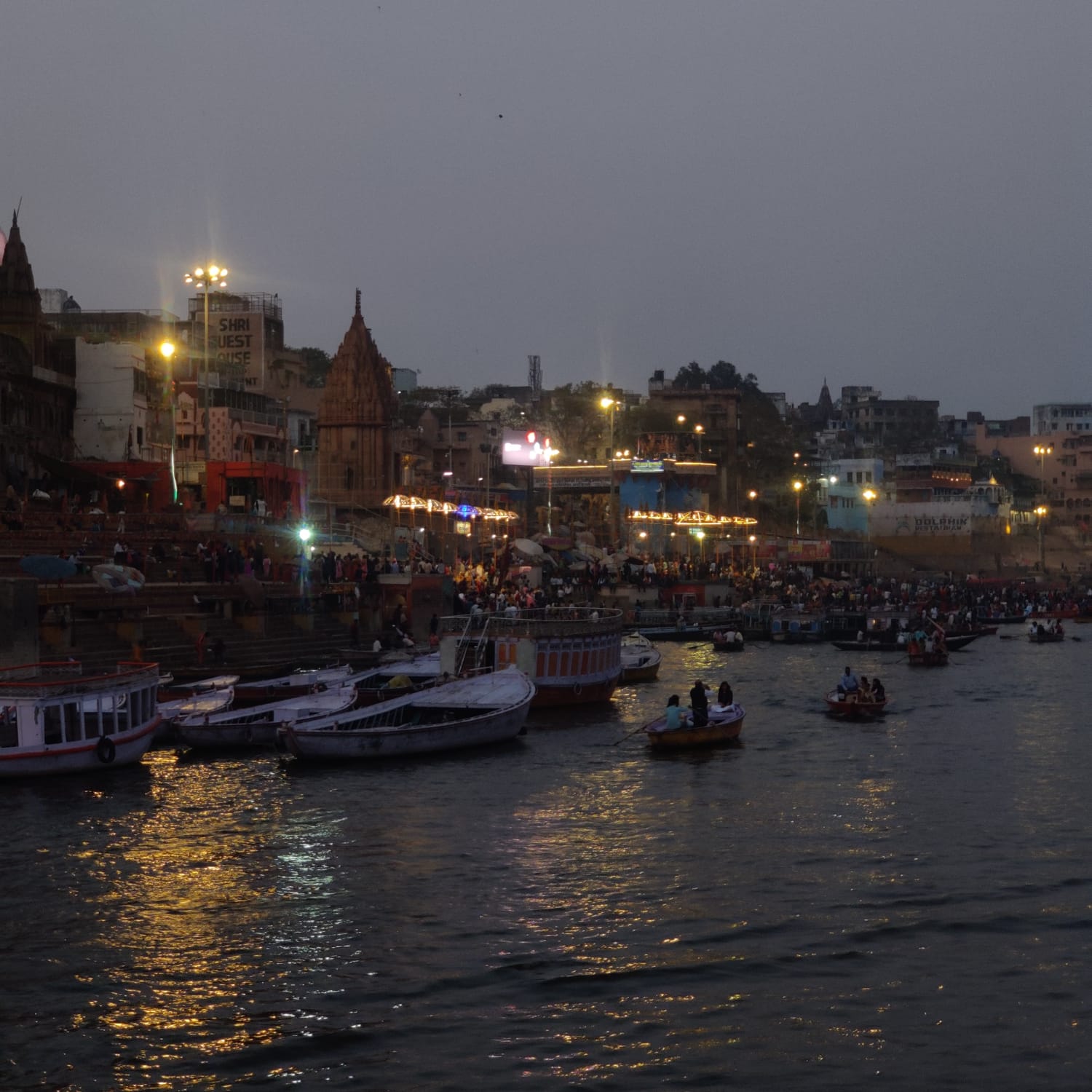 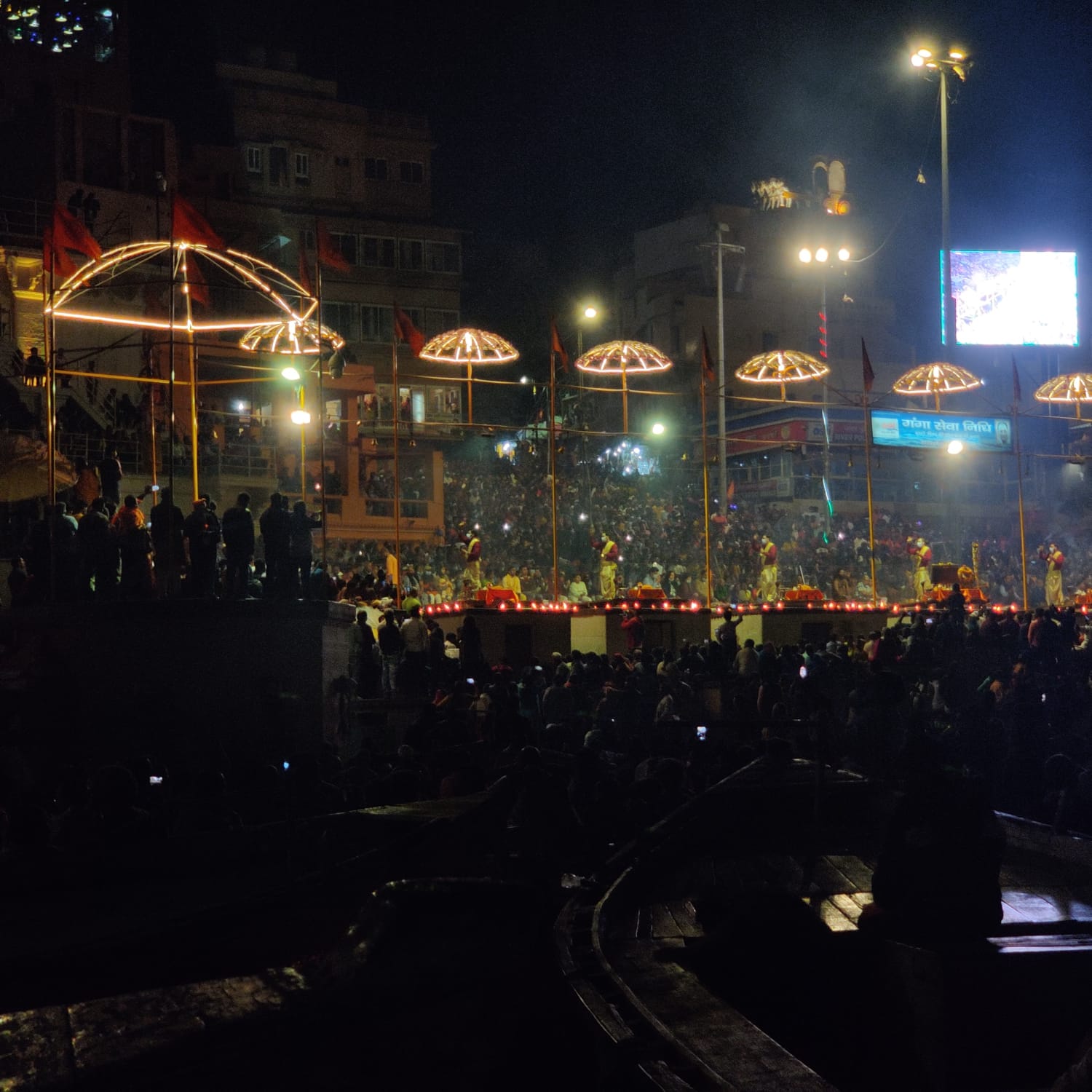 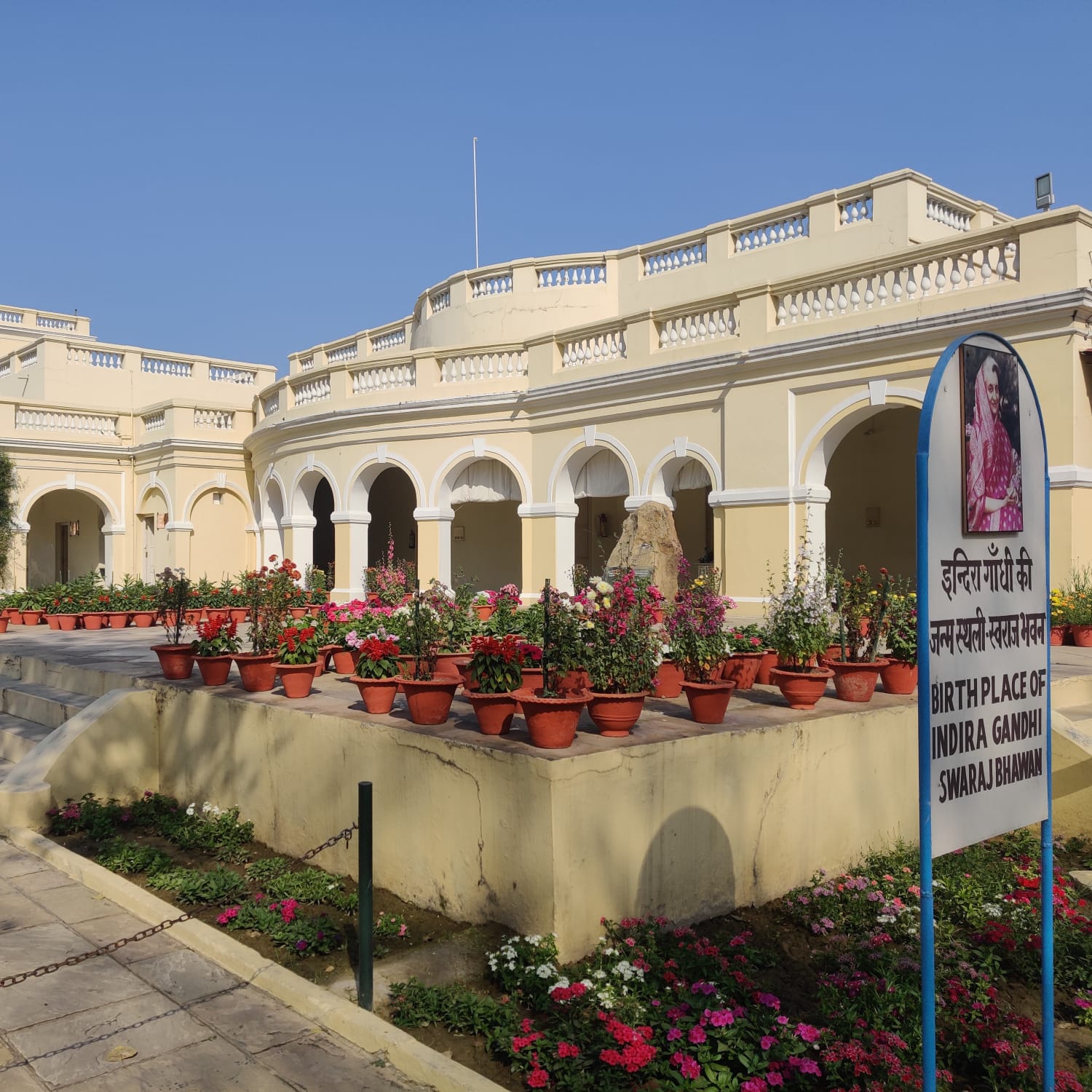 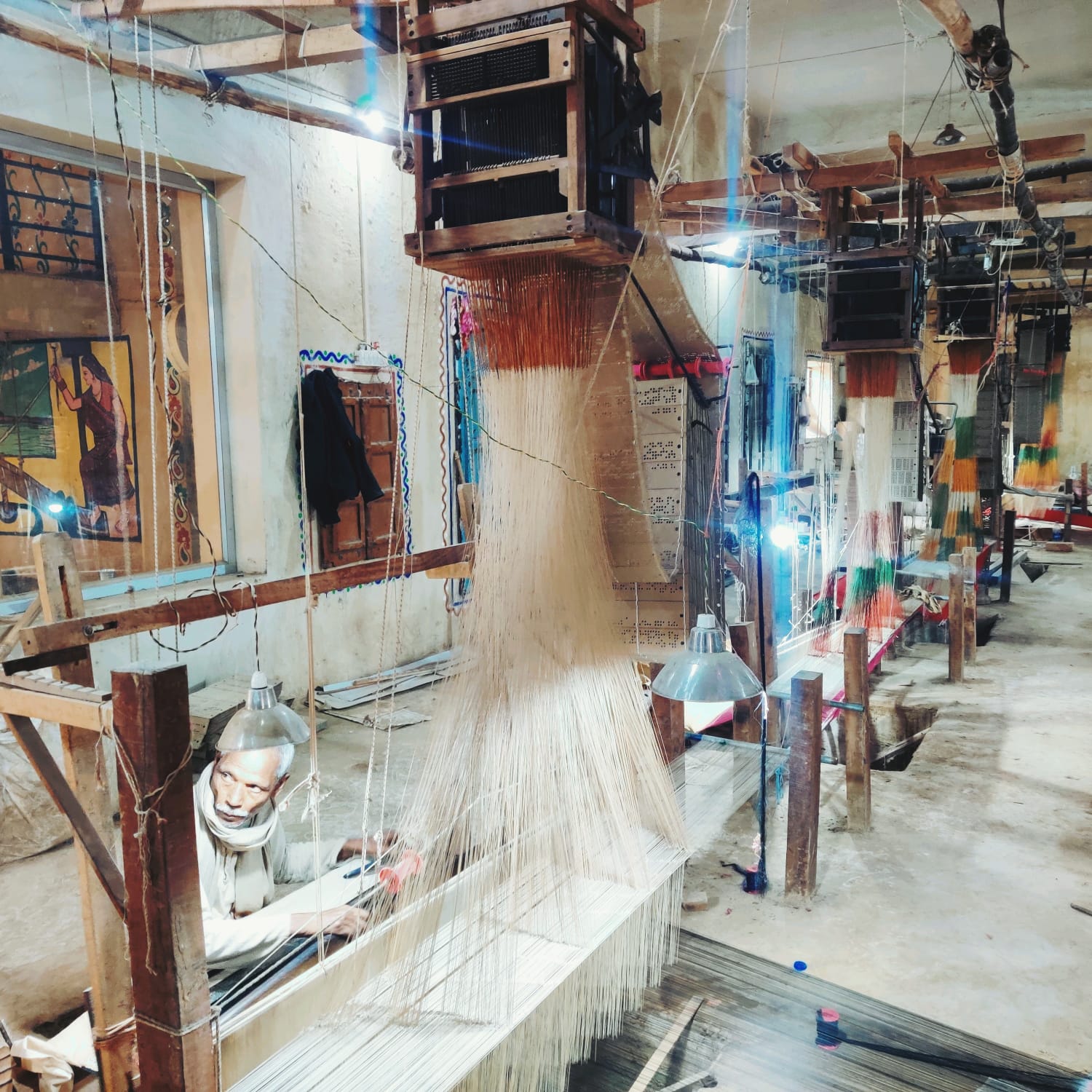 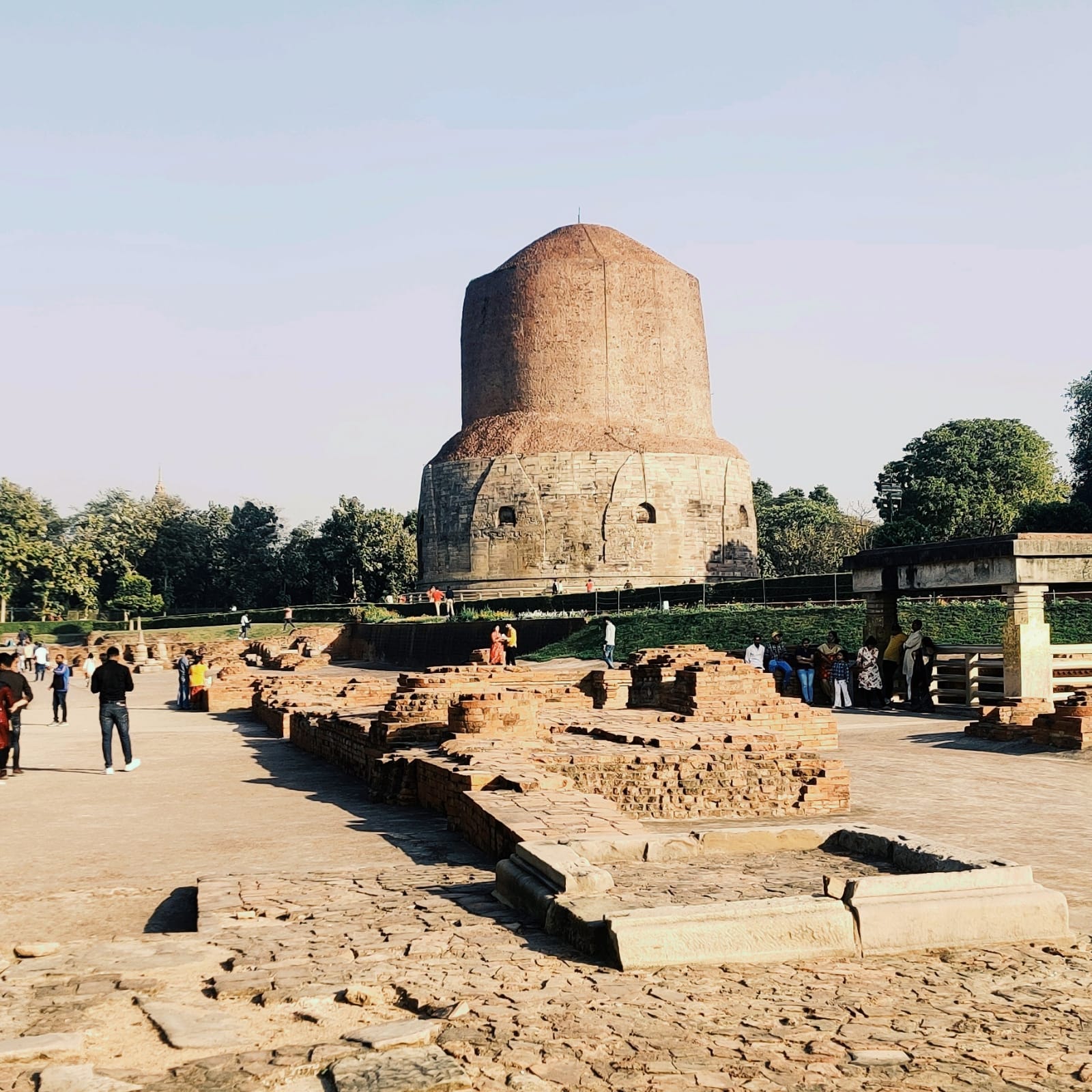 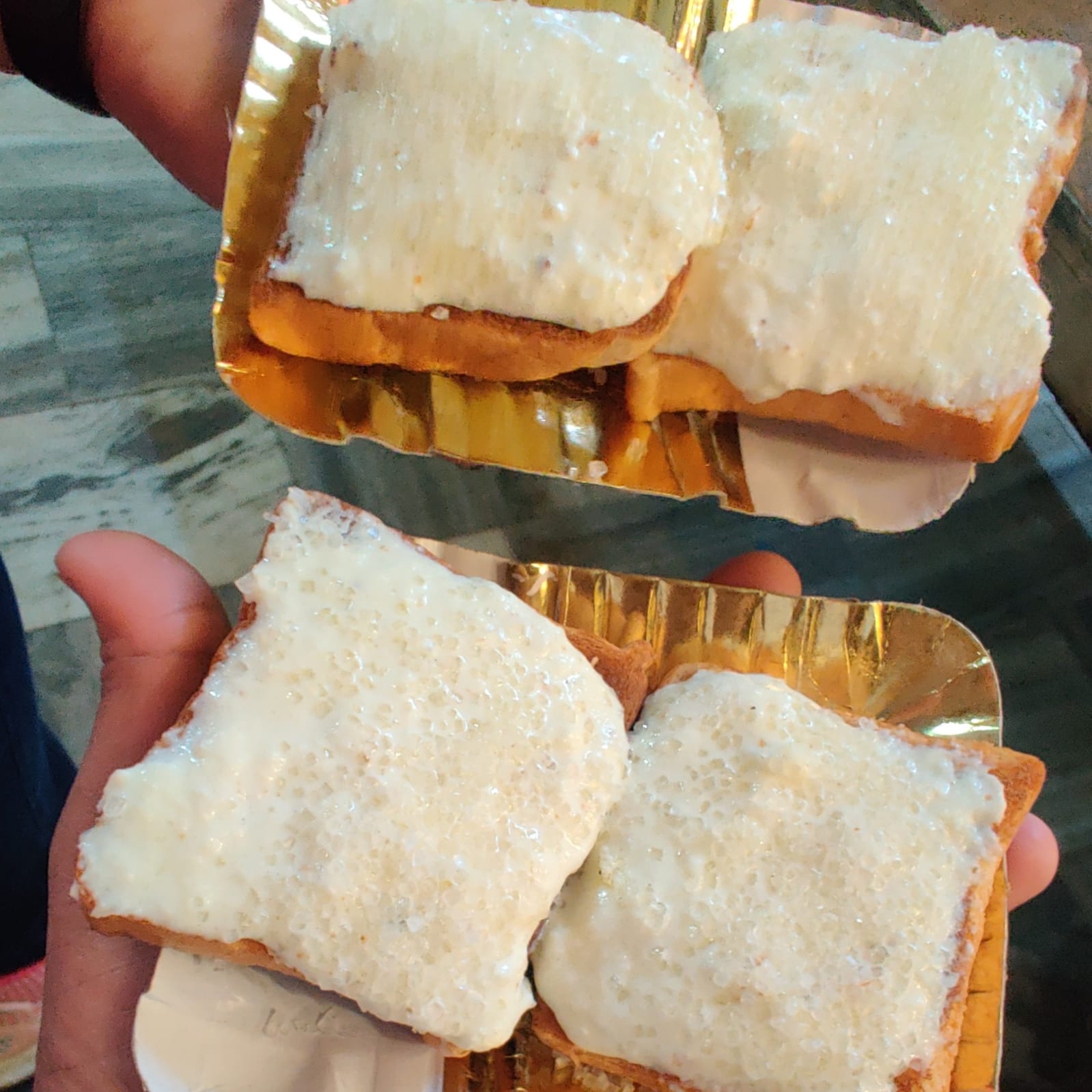 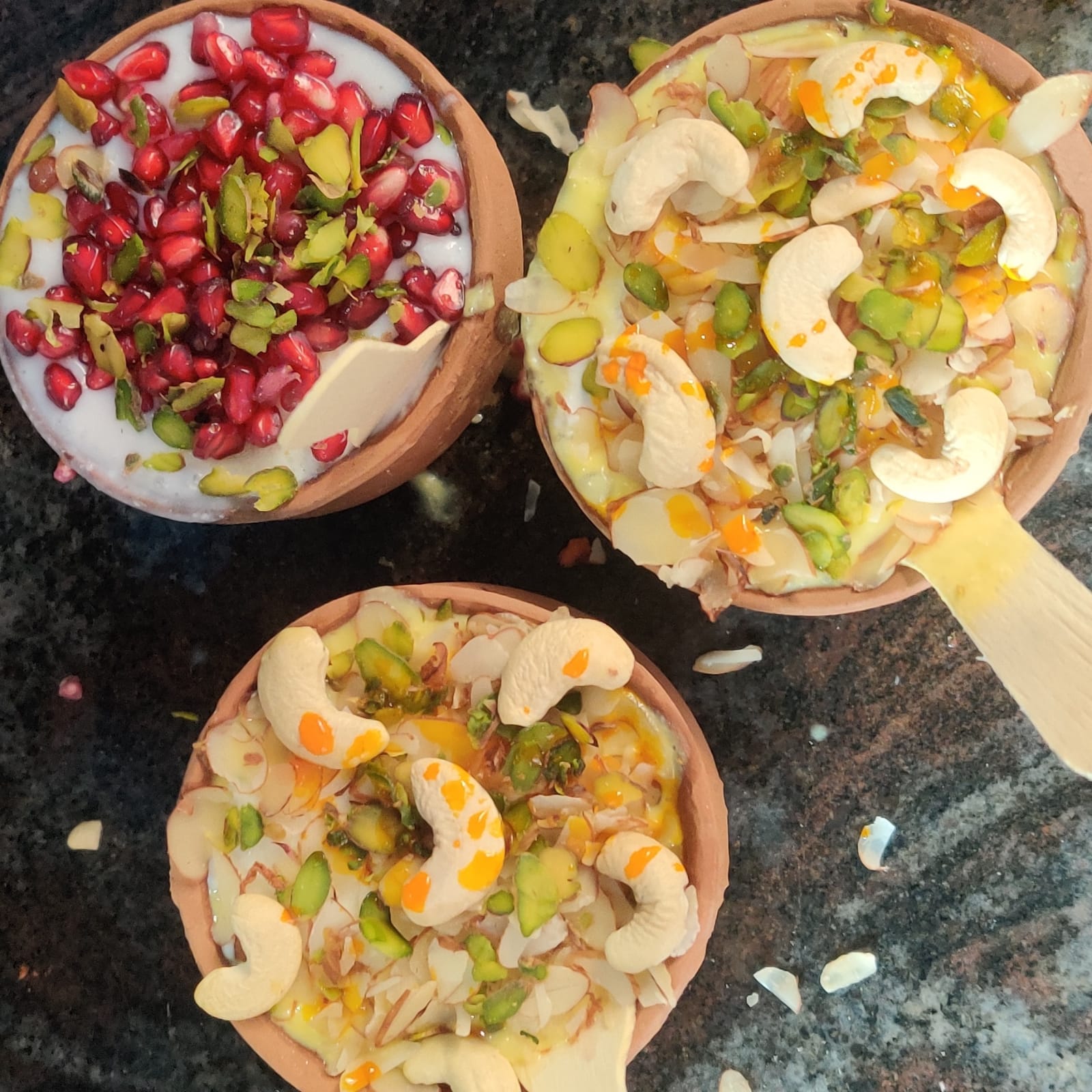 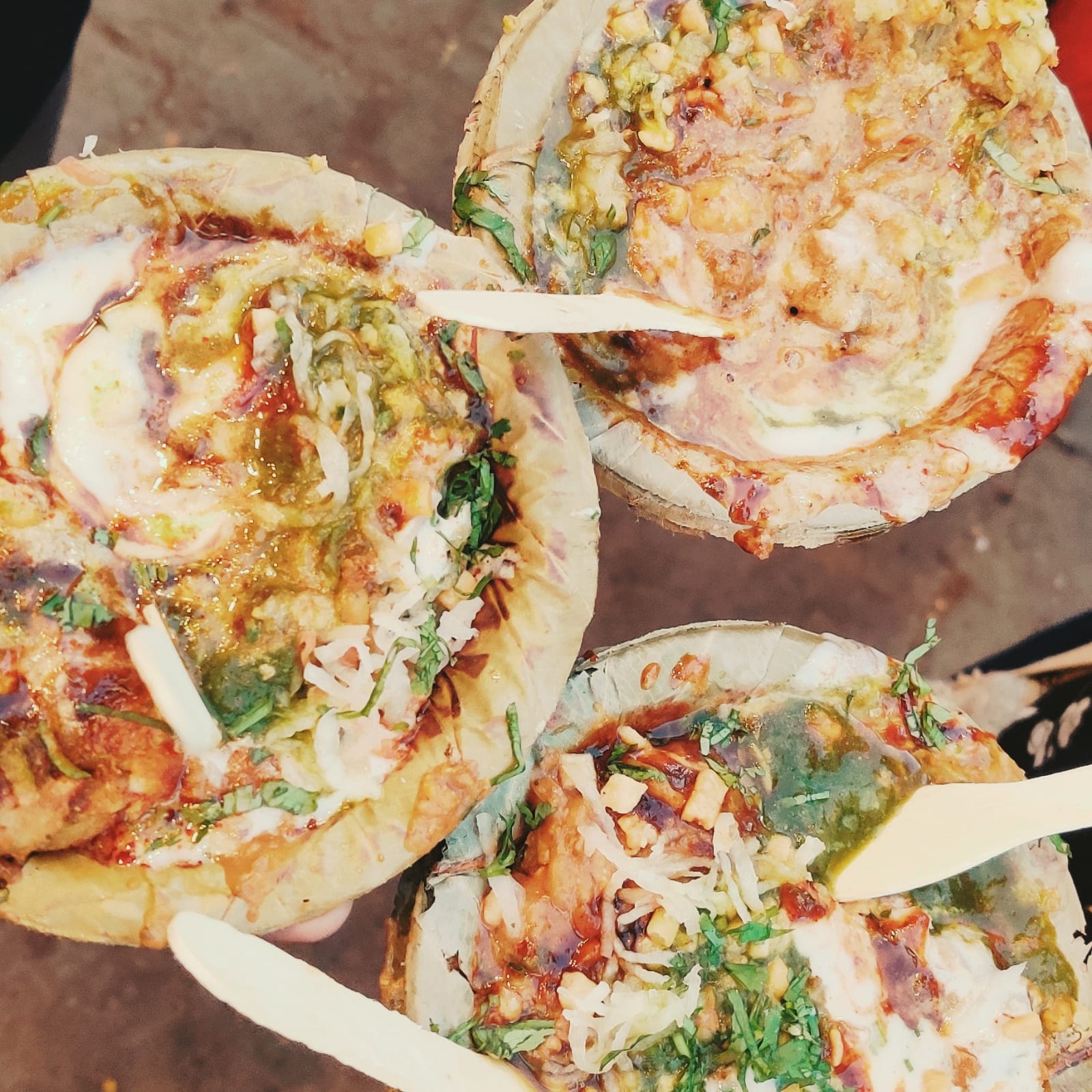 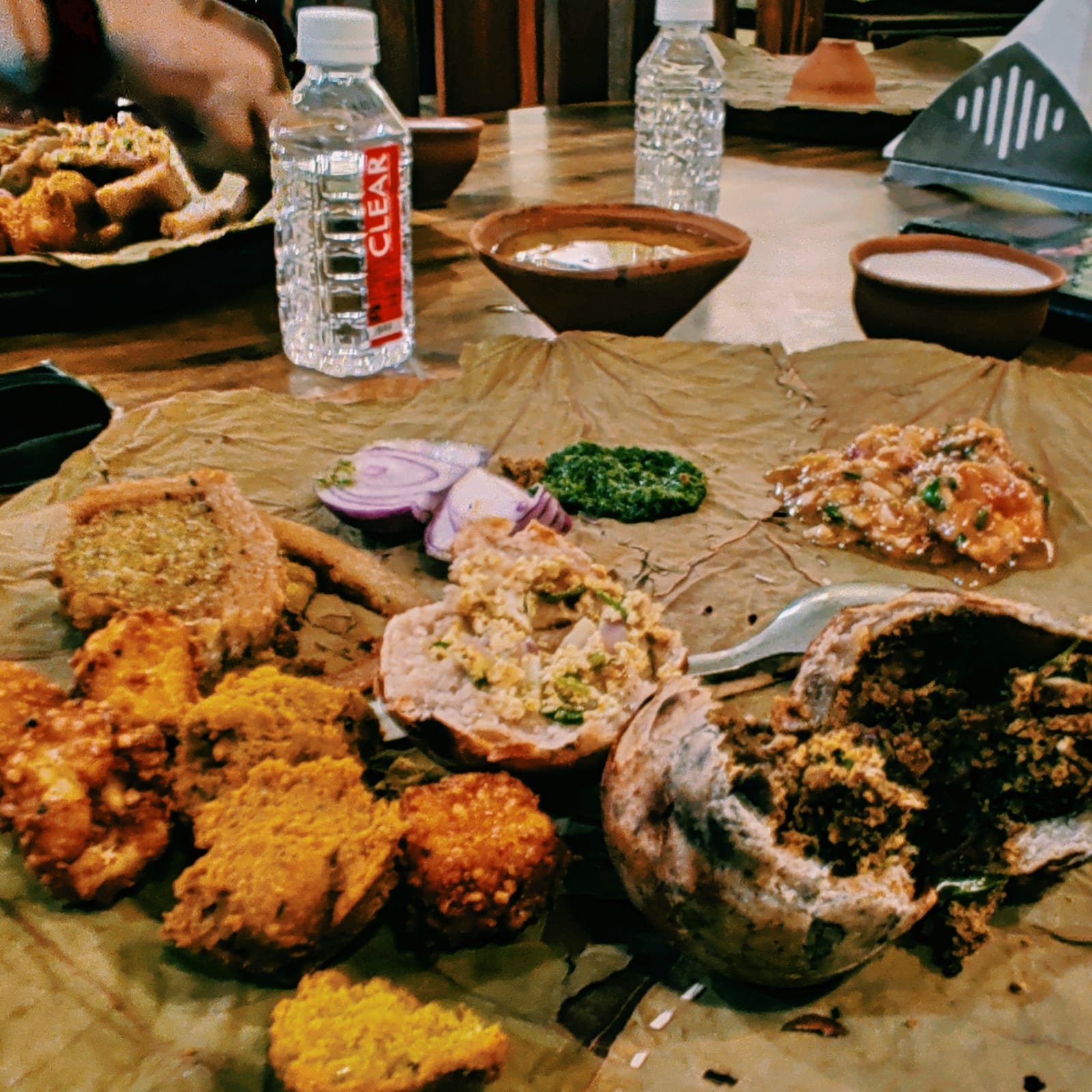 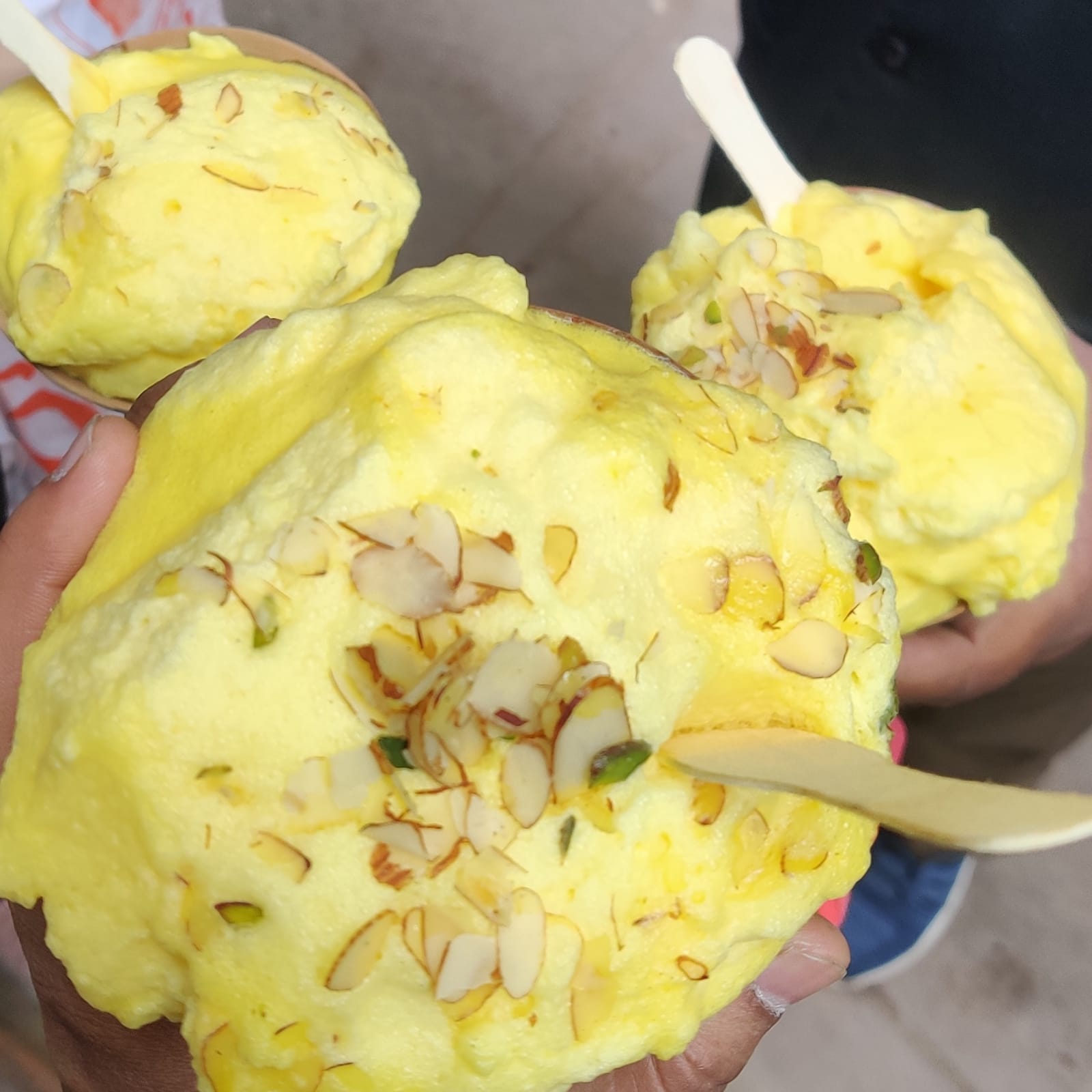 Hats off to you Supriya for organizing a wonderful tour. You are ably assisted by Sameer in this endeavour . Everyone’s need was taken care off. Your personal attention to everyone’s need was excellent . 7 कसे गेले हे कळलेच नाही. Food was excellent . 5 stars for food . Thanks a lot . Above experience was for the tour of Vranasi, Ayodhya & Lucknow !

Sarnath – 10km from Varanasi, is one of the most revered Buddhist pilgrimage centers. After attaining the Enlightenment at Bodh Gaya, it was here that Lord Buddha preached his first sermon, sanctified as Maha Dharm Chakra Pravartan. The great Dhamekh Stupa and several other structures stand testimony to the importance the place enjoyed at that time. The Chaukhandi Stupa is the place where, during his first visit to Sarnath, Lord Buddha met his first five disciples. The area is a treasure trove of archaeological findings such as Dharmrajika Stupa and Mulgandhkuti Vihar. The smooth glistening pillar established by Emperor Ashoka in 273-232 B.C. marks the foundation of the Buddhist Sangha, and the Lion Capital atop this pillar is now India’s National Emblem. Its reputation as a center of Buddhist learning spreads far and wide and is a revered location and a great attraction for tourists from across the world.

Ghats of Varanasi – The  great  well constructed  river  banks  are called  Ghats.  On  these ghats, are  located  high pavilions, palaces, temples and terraces,  which  add further  charm to  the  beautiful river bank. The  ghats  are  frequented  by the people  which include early morning bathers, priests, people  practicing meditation and yoga, students and  tourists  as  well.  The  eternal crematorium is located  at  Manikarnika Ghat. It is  believed that  the person,  who  is  creamed at this place,   attains  salvation  from the cycle of  birth  and  death.  For centuries, pilgrims have traced the perimeter of the city by a ritual parikrama (circumambulation) paying homage to shrines on the way. Among the most popular routes is the Panchatirthi Yatra, which takes in the Pancha (five) Trithi (crossing) of Assi, Dashashwamedha, Adi Keshva, Panchganga and finally Manikarnika. The devotee, accompanied by a priest, recites a sankalpa (statement of intent) and performs a ritual at each stage of the journey.
A  very relaxed  way  to see the ghats  and its  life  in  the  morning  and evening  is  by a boat.

Kashi Vishwanath Temple – Also known as the Golden Temple, it is dedicated to Lord Shiva, the presiding deity of the city. Varanasi is said to be the point at which the first jyotirlinga, the fiery pillar of light by which Shiva manifested his supremacy over other gods, broke through the earth’s crust and flared towards the heavens. To reach here, tourists have to pass through Kashi Vishwanath Gali, famous for its shops selling pooja items and sweets. There’s also a popular ladies corner in its alleyway that tourists explore for affordable shopping. Adjacent to Kashi Vishwanath Mandir are Annapoorna Temple, Dundiraj Vinayak and Gyanwapi which is regularly frequented by  pilgrims.

Banaras Hindu University – Bharat  Ratna Pandit Madan Mohan Malaviya,  a  renowned  freedom  fighter  founded Banaras Hindu  University (BHU)  in  the year 1916. Dr. Annie Besant also  played an important role in the formation of this Central University. Over a period of time, it has developed into one of the greatest centers of learning in India. The BHU has produced many great freedom fighters and Nation builders. It has immensely contributed to the progress of the nation through a large number of renowned scholars, artists and scientists. Its campus is spread over 1300 acres. It has well maintained roads (crossing each other at right angle), extensive greenery, a temple, an airstrip and buildings, which are an architectural delight.

Popular Food in Varanasi –
Bati Chokha: A traditional dish from eatern UP and Bihar, these oven baked channa dal cakes (litti) eaten with chokha (traditionally made of smoked eggplant), is a fulfilling dish for your tummy.
Chaat: Finely cut tomatoes mashed with spices, or crispy batter fried spinach, served with curd, sev, sweetened tamarind chutney or spicy green chutney, Varanasi is famous for its own style of chaats.
Banarasi Paan: Journey to Banares will be incomplete if you forget to tantalize your taste buds with the exciting flavours of the worldwide famous Banaresi Paan.
Kachori: the lane just beyond Kashi Vishwanath Temple is the Kachori Gali, savour the flavour of freshly fried kachoris with spicy mint chatni.
Lassi: A pleasing way to end a typical Banaresi breakfast is to have a kullhad (earthen glass) of thick, cardamom, flavoured lassi, served with a generous topping of cream.

Prayagraj – is an important city of Uttar Pradesh which is also known as Prayag that comes from its position at the Sangam (confluence) of three holy rivers that are Ganga, Yamuna and Saraswati which is a sacred place for Hindus.

Ayodhya – city was the capital of the ancient kingdom of Ayodhya, where Lord Ram was born. It is also mentioned in Hindu mythology and the Ramayana. The ancient scripture of Atharvaveda describes Ayodhya as ‘a city built by gods’ and compares its prosperity with the glory and splendor of the paradise. Babur, the founder of the Mughal Empire in India, constructed a mosque in Ayodhya. It became the part of the great Mughal Empire and was ruled by them for many years. After the decline of the Mughal Empire, it became a part of the regional state of Awadh, which was later annexed by the British.

Lucknow – is the capital of Uttar Pradesh, Lucknow has long been a seat of administration and culture. Second only to Delhi in importance in the region, and the seventh largest city in India, Lucknow is easily accessible from all major cities in the country. Vibrant and cosmopolitan Lucknow earned fame as the seat of the Nawabs of Awadh in 18th century. Its history and heritage, however, goes back much further. The city is believed to have been founded by Lakshman, the younger brother of Lord Ram, who gave his name to it. As Lucknow grew it came under the rule of various kingdoms including the Delhi Sultans and the Mughals. The city finally came into its own in the 18th and 19th centuries as the capital of the Nawabs of Awadh, who were feudatories of Mughals. They lavished such attention on it that it came to be known as the “Golden City” and “Constantinople of the East”. The disintegration of the Mughal Empire made Awadh a kingdom in its own right.