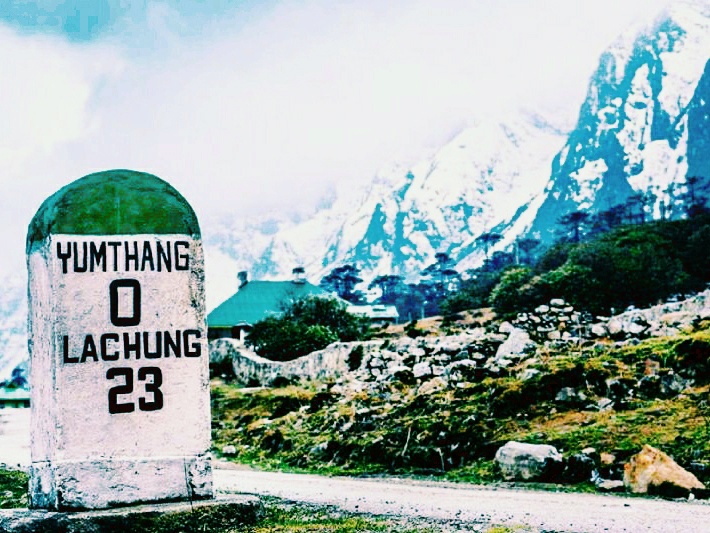 If there is one place which is a world of its own far away from the stressful world we live in, it has to be the majestic Sikkim. Sikkim holds a very controversial geographical importance as it is bordered by Bhutan, Tibet and China. Sikkim is also famous for its highest peak in India- the Kanchenjunga Mountain which is at 8586 meters. For a fact, Kanchenjunga is also the 3rd highest peak in the world.

The beauty of this beautiful state doesn’t end there, Sikkim is also known for its beautiful glaciers, more than 10000 varieties of flowers and alpine meadows. There are also adventurous steep paths which lead to the ancient Buddhist monasteries like Pemayangtse which is approximately 400 years old.

Sikkim is also known as “Valley of Flowers” and some of the most romantic movies of India are shot at this picturesque state. The capital of Sikkim is the city of Gangtok which is another place the tourist guide will surely suggest you to visit. Even though Sikkim is one place where a tour of 7-8 days is also not enough as there are many places to cover but in a quick preview, we shortlist some top places one must surely visit.

Must Visit Places in Sikkim-

Lachung (8800 ft) is a embraced by snow clad mountain peaks and has beautiful waterfalls, peaches, apricots & apple orchards!! The 19th century Lachung Monastery is a good place to visit. Lachung acts as the gateway to Yumthang Valley and Zero Point.

At a distance of 24 kms from Lachung lies the Yumthang Valley which is home to the Shingba Rhododendron Sanctuary. It has over twenty-four species of the rhododendron – the state flower. Further ahead we go to a place called as ‘Zero Point’ (15300 ft) which is the last point a civilian is permitted to travel. Further ahead lies the Indo China border. Though the roads can be treacherous, driving here is worth as the views of the beautiful and pristine mountains is a sight to enjoy! You can also get a chance of seeing Yaks in the snow as it hardly has any green pastures.

Buddha Park has a magical backdrop of Himalayan peaks adored with a 41m tall Buddha statue making it one of the most iconic places of Sikkim. The large manicured lawns, the fresh breath of air, a beautiful landscape makes it no less than a heavenly meditative atmosphere. The huge plinth also consists of a big Buddha gallery displaying various scenes and journey of Buddha’s life. There are also holy relics from 11 countries inside the inner cylinder of murals.

It is believed that 70% of the tourists who visit Sikkim don’t miss out on visiting Mama’s kitchen. It’s a warm and welcoming place where you will be able to relinquish the most delicious, home cuisine of Sikkimese people. The food is laboriously cooked from scratch and it takes hours to prepare a meal. One has to book a dining appointment and pre order to visit this place.

Rumtek Gompa is one of the most spiritually significant monasteries in the state. It is an ancient self contained village and its highlight attraction is the giant yellow throne which still awaits the coronation of their Kagyu spiritual leader- the 17th Karmapa. There is also Nalanda Institute of Buddhist Studies right behind the monastery distinctively painted to catch the visitor’s attraction. As you dig deep into the majestic monastery, you will come across a Golden Stupa which is studded with turquoise and amber stones.

Himalayan Zoological Park is widely considered to be one of the most well maintained zoos in India. Snow leopards, the Himalayan bears, the red pandas and foxes are some of the star attractions at this zoo!